On a cold Saturday morning a group of volunteers with the Students’ Union set off to work at the beautiful site of Arnside Knott Nature Reserve.

Once reaching the site we had a monstrous hill to climb which seemed to be at a 90 degree angle! The beautiful scenic views at the top looking down onto the valley and the sea made the walk up well worth it. Now with the sun shining bright warming us up, we were ready to get working.

The area was limestone grasslands which hold key importance to biodiversity as the habitat holds a wide variety of species of plants, invertebrates and birds- many of which are rare.  For example the Scotch Argus is found on this site- a very rare butterfly which is only found in two sites in England. The problem this important habitat faces is natural succession- brambles, shrubs and young woodland encourage the habitat so the low-nutrient, rich in diversity species of plants cannot grow.

The national trust is responsible for managing the site with the aim to balance conservation, farming and public access- although this is more difficult than it seems. They regularly graze livestock (selection of different breeds of cows) on the land although the cattle cannot graze areas that are over-grown.  This is where volunteers come in to help. The work we were doing on Saturday was clearing a patch of woodland at the edge of the forest to create connectivity to woodlands with clearings on near-by sites. This work aims to connect the Scotch Argus butterfly to new sites increasing its habitat range and population size- very important work to be involved in.

The national trust employees used chainsaws to chop trees down and our job was to organise the wood; small sticks were burnt on the fire, medium size logs were stacked and used as habitats (great for invertebrates and small mammals) and the larger logs were stacked ready to be cut and sold to the locals (essential funding for the site). Lunch was enjoyed with cups of tea, sandwiches, packets of crisps (and a piece of toast) chit chat and jokes before returning back to work. After a long day of hard work we all gathered around the fire to enjoy s’mors- roasted marshmallows with chocolate digested biscuits and even roasted jelly cubes. The day out was a great experience, lots of fun with great people and working on such an important conservation project was very special. The volunteering day will be running around the same time next year a volunteering experience you do not want to miss out on.

Weatherigg Zoo is an animal rescue centre- which holds a full array of animals. From lama’s to meercats, from goats and to snakes. Weatherigg Zoo has them all.

The Zoo used to be situated in Penrith and has since moved to a new site. With only 4 weeks or so until they open to the public, there was a lot of work that needed to be done. That’s when our group of volunteers came to help.

We had three tasks in groups to do, first was empting out the building with the shop and petting zoo making it presentable and tidy, second was clearing litter on the path way and third was creating fences for outdoor enclosures.

Clearing the building out with the shop and petting zoo, involved a lot of heavy lifting. Working right next to friendly goats, a beautiful lama, many guinea pigs, rodents and rabbits was a rare treat we gladly got to experience. This made our muscles strong with determination to get the place spick and span for the opening day.

During, the clearing out we noticed one rabbit had new born babies, we saw bald little rabbits crawling out of the nest, made of the mothers fur, with their eyes not even opened yet- was the most cutest baby creature I have seen.

Unfortunately one of the offspring had died, but at the zoo no life is wasted and we were allowed to feed it to the kestrel they have- in which the kestrel was very grateful.  Whilst feeding the kestrel a dead pheasant was found- but no worries as the vulture enjoyed the meal.

After feeding the animals it was time for our own lunch. Tea, coffee, and biscuits were provided by the zoo, some brought their own packed lunch and others went to the café to enjoy a nice warm meal. 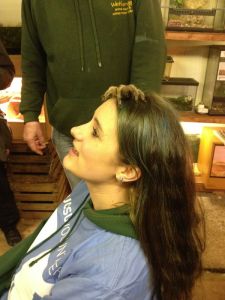 After lunch the most exciting part of the day came. Terry (a man who works at the zoo) took us to see the snakes and the tarantulas. Gemma, who is the bravest person I have met, volunteered to have the tarantulas on her head! She described the experience as ‘really good’ as she really likes spiders. Well she definitely became one with the tarantulas after this experience. Terry was very knowledgeable on the animals that live in the Zoo- he taught us that tarantulas have not eight legs but ten!! This evolved as the tarantulas could run a lot faster, which was beneficial to catching prey. After each getting the amazing chance of holding the beautiful creature that is a snake, it was time to get back on with work.

The groups swapped tasks and I was now on picking up litter duty. The zoo is right next to a busy road. Many people chuck litter out of their cars, without thinking where it would end up. A lot of which ended up on the zoo and it was our task to pick it up, along with the plastic casing and wooden sticks, from the trees that no longer needed structural support. Whilst doing this task we found a burial ground of bones- from which we could see many wild species visit the zoo. From badgers to rabbits- nature on the zoo was ever present. We were also shocked to find a free-range wallaby, who was a delight to work alongside with. After a long hard day’s work full of excitement and cuddles from animals, we were ready to go home with big smiles on our faces and a grand feeling of accomplishment. It was great to help out all the nice people and lovely animals we had met. There is always a need for volunteering at the zoo, so if you would like a great experience like we had; give them a call!  I wish the Zoo full success for opening up to the public and with the future 🙂 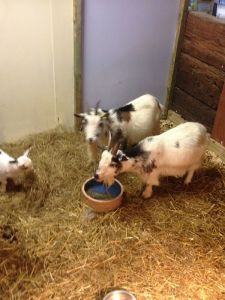