On Saturday 17th November 11 students from the University of Cumbria Penrith, Carlisle and Lancaster sites joined up with the National Trust at Arnside Knott for a day of chopping and burning all in the name of consrvation. Despite the fact that the Weather had been pretty miserable all week the rain held off and all day spent outdoors was great fun (although the group was so enthusiastic and keen to get stuck in that I doubt the rain would have had a huge impact). We were surrounded by limestone grassland which is very species rich and therefore very good for biodiversity. Our aim for the day was to clear an area of woodland and young trees as they act as a conopy/barrier to the woodland floor and prevent light getting in which means nothing can grow. We used saws and loppers to help us with our task and built up a bonfire over the day to burn everything up (and get some extra heat when it got really cold). 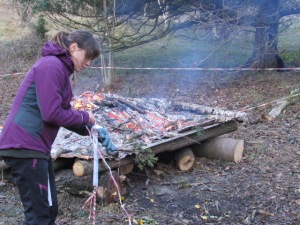 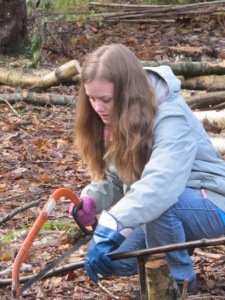 By the end of the day there was lots of light getting in to where we had beeen volunteering which is now going to improve key species in the area such as blue moor grass which is habitat for Scotch Argus butterflies and wood ants which need an open sunny space. Juniper bushes and other schrubs at the site also needed the light to grow. The female Junipers have berries that are used in flaouring Gin or cooking lamb, however Richard one of our volunteers discovered that on their own they are not a good taste and will leave you with a very dry mouth!

It was great to have Steve Bradley, Ranger and Ross James, Trainee Ranger on site with us all day as they explained why the volunteering was important and instead of it just being a great day in the outdoors we could also see the value of what we were doing and understand a bit more about conservation. 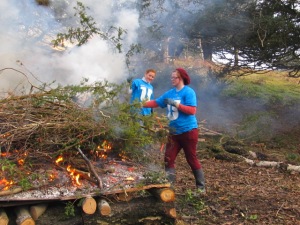 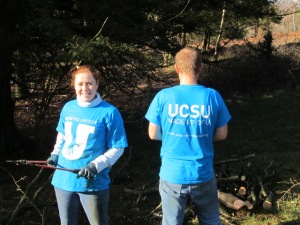 This is the 2nd year we’ve joined National Trust at Arnside Knott although this year we weren’t joined by any cows roming the land. We did learn however that the cattle in that particular area are used Ewe leaves  when it’s on the tree in small doses and mixed with other things however at the end of the day we all picked up small bits of the Ewe Tree as apparently when they dry up they are poisiness to cattle (who knew!). Once we were packed up for the day and all the Ewe bits were collected we were taken on a tour and to the top of the hill to see the grogeous views, overlooking Heysham, Barrow and Morcombe. 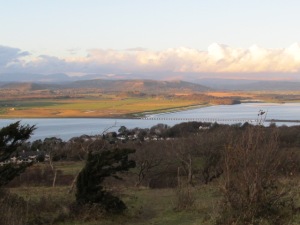 From the 31st May through to the 17th July 2012, Stacey and I went to Kenya as part of a teaching project, with GVI (Global Vision International). We were based in Shimoni (mainland) and Mkwiro (on Wasini Island) on the beautiful Shimoni archipelago, on the southern coast of Kenya. We flew into Mombasa on the first day of our expedition and we were met by field staff who took us down to Shimoni/Mkwiro along with other volunteers. We had time to settle in and then we began our training which was required for the time we spent there.

We spent our time with children aged from three up to eighteen years old. We worked in a mix of both public and private schools. Whilst in Shimoni we worked in five different Schools (Base Academy Primary School, Shimoni Primary School, Shimoni Secondary School, Matunda Bora Primary School and Shimoni Junior Academy Primary School). There was a large difference in the class sizes between each school, some schools had classes which had around seven children per class whereas, some schools had about 40 children per class. All schools were divided into Standards, from KG1 to KG3 (Kindergarten) and then Standard 4 through to Standard 8. We were involved with being the lead teacher in the classroom as well as assisting. We also provided one to one support sessions with children who were struggling. The majority of our teaching time was spent improving the English levels of the children we were working with, but we also taught lessons such as maths, reading, sports and creative arts. We used blackboards and chalk whilst teaching and the majority of the children had no paper or pens so we had to adjust our lesson plans to make sure these children could partake and benefit from each lesson every time.

Occasionally we went to visit the children at the local orphanage where we read to them, played games, let them do drawings and listened to them whilst they spoke to us. We taught on average three to five hours a day and spent the rest of our time planning lessons and preparing for the following day. On a Friday afternoon, we would go outside with the Kindergarten children and took part in ‘music and movement’ where they would take the opportunity to have fun, sing and dance with us. We were also involved in working with local community groups, teaching them skills that will help them to develop sustainable livelihoods. The Mkwiro Women’s group was one of these, and we helped them as they aimed to create a business to sell items; bags, purses, mats to suppliers in Diana. All these products were handmade from palm tree leaves which had been woven together. It was with the women’s group that we also had a cookery lesson with and Stacey was decorated with Henna and Piku. During our time in Mkwiro, we taught everyday in Mkwiro Primary School with each Standard.

Adult learning was a major focus for GVI in Shimoni and Mkwiro, and whilst Shimoni had a successful computer class, where local people learnt the basics of Microsoft word, so they could create food menu’s for their own businesses; Mkwiro had successful Adult Maths and English classes.

At the same time we were in Shimoni, there was also a health project being established, and we had the opportunity to visit the dispensary and meet the staff that worked there. We were fortunate to see the medical rooms as well as the labour room and were pleased to hear funding had been issued for them to build new buildings to replace the existing worn out dispensary.

As well as writing a report for Eleanor Peel, whilst in Shimoni and Mkwiro we were both asked to write a blog, to go onto the GVI website to promote the positive work which was going on out there; to keep previous staff and volunteers up to date as well as giving prospective volunteers an insight into the hard work which took place. We have added the links to the report below if you wish to see these.

Many Thanks to the Eleanor Peel Fund for the contribution towards the most amazing experience we have ever had! We hope you have enjoyed reading our story,

On 14th of August 2012 my sister, Jen, my friend, Fran, and I set off on our trip to Malawi. We had been planning it since January and so were very excited and had all worked hard to raise £3000 which would be put towards a feeding program to support the children of the village we would be volunteering in.

We were working in Domasi, a small village in southern Malawi. The project we were volunteering at was called The Tikondwe Youth Organisation and was run by a self-made Malawian man called Joshua, who founded the project 12 years ago when he was just 15 years old. The organisation started out with one school for local children who cannot afford the mere 75p it costs to go to government funded school each year and has now grown to consist of 7 schools, the newest one only having finished being built a few weeks before we arrived,, a HIV Support group for local villagers who are HIV+ and they are also in the process of building an orphanage for local children who have lost their parents to this disease and other circumstances. . Each of the seven schools has around 30 children although attendance was variable.

Tikondwe is deeply committed to improving the lives of poor children and orphans through basic education. As part of this plan, the organisation runs a feeding program which offers a free meal to every child who attends the morning lesson (targeted at children aged 3 to 6 years). The main aims of this program are firstly to ensure that the children receive at least one meal a day; however there are many further benefits that both the children and the village receive as a result of this. The prospect of a free meal encourages parents to send their children to school in taking some of the pressure off of them to feed their children and especially the orphaned children of the village, which they may not always be able to afford to do. The children are also better able to concentrate during lessons when they are not hungry and therefore take in much more and receive a better education in the process. This project had been running for 7 years but recently, with Malawi being one of the poorest countries in Africa, funding was running out and the feeding program had had to be suspended in many of the schools. It was due to this and because of the multiple other benefits that the program brings for the children and the village that we were inspired to raise £3000 for its support – enough money to keep the feeding program running in every school for a whole year. While this was a high target, we felt it was a very worthwhile cause and so we were happy to be able to help and delighted by the generosity of our donors. We also took donations of stationary, teaching aids and toys for the children and the schools, which we were able to utilise in some of our lessons.

hile we were in Domasi, the three of us worked in three of the Tikondwe Youth Organisation’s different free schools. With my background in Special Educational Needs (SEN), I was asked to work with the children that had been identified by other volunteers as having SEN. The morning started with the younger children who would be benefiting from the feeding program. I worked with two children in particular; Overtune, who understood little English, was non-verbal and had a hearing impairment and Jewsoma, who had Down’s syndrome and had a fairly good grasp of English. The teaching mostly consisted of playing with different educational toys, interacting with the children one-on-one and giving them lots of praise.

Once we had finished the morning’s teaching the Feeding Project started. All the children received a bowl of maize porridge which the local teacher cooked for them. They all seemed to enjoy their meal and this was another reason that the parents sent their children to school.

In the afternoon I worked with Seleni, who was 14 and had been diagnosed with Autism, and Mary, who suffered from epilepsy.

Jen and Fran taught whole classes of between 20 and 50 children. The teaching mostly consisted of lessons in English and Maths. A local volunteer teacher was always on hand to help translate for us into Chichewa, the local language, to make sure that the children fully understood our lessons.

Thanks to the Eleanor Peel Trust I had the means to travel to Malawi to see that the Tikondwe Youth Organisation’s Feeding Program has enough money to continue supporting the children of Domasi and their families for the whole of next year, as well as to offer my teaching expertise to children who need it most. I feel very privileged and proud to have been part of making this happen and would like to extend our thanks to both the Fund and our other donors who helped make all this possible and gave us all such an invaluable and unforgettable experience.